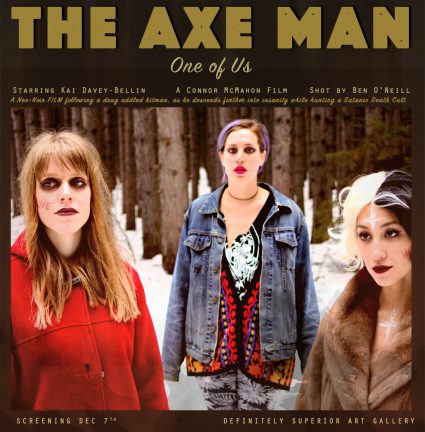 DefSup invites you to,
The Premiere Screening of a new Film by local director Connor McMahon,

Connor McMahon is a writer/director living in Thunder Bay. He attended Con College film program where he met Ben O’Neill who helped him make the Axe Man. It was shot guerrilla style over a one week period, with almost no budget. Connor purchased a computer 6 months later and took 1.5 year to edit the film. He has subpar vision and is drawn to harsh vibrant colours. The Axe Man was heavily influenced by the Pusher Trilogy. Connor is also a visual artist and has a Comic/Magazine company called BUJET INK. He is currently working on a vigilante comic called ‘Tuff Chudz’ & a crime comic called ‘Sunsy/Side.’