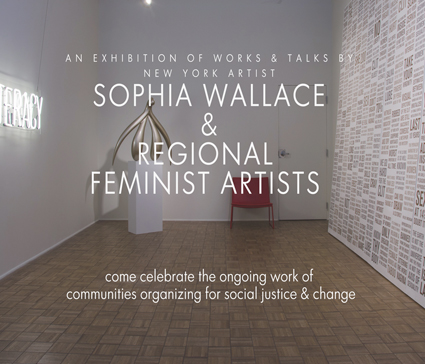 Brought to you by the Gender Issues Centre and Definitely Superior’s Die Active Art Collective.

Sophia Wallace is an internationally known American conceptual artist and photographer, based in New York City.

Through the use of images, video and mixed media, she explores alterity. Wallace’s focus is how otherness is constructed visually on the gendered, sexualized, racialized body.

Wallace has presented her work in major exhibitions in the U.S. and abroad, including Kunsthalle Wien Museum, Art Basel Miami, Scope NY, Taschen Gallery and Aperture Gallery among others. She was awarded PDN’s Curator Award, Critic’s Pick by the Griffin Museum, American Photography AP-25 and ArtSlant’s Showcase Award. Her work has been reviewed in BLOUIN Art Info, The New Yorker, Salon, Huffington Post, Fast Company, Hyperallergic and Bitch Magazine, among other publications.

Wallace holds a BA from Smith College and an MA in Photography from NYU and the International Center of Photography. In 2012, she was a Van Lier Fellow. Recent residencies include the Art Law Residency, Wassaic Residency and the Artist Lab Residency at CENTER.