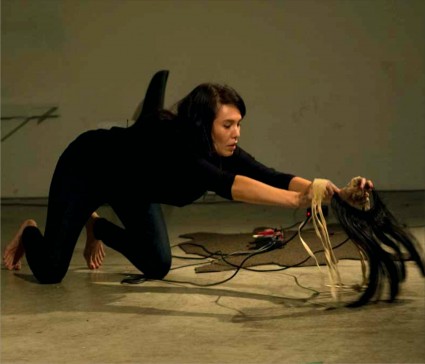 Jeneen Frei Njootli is a Vuntut Gwitchin artist, Grunt Gallery board of directors member and co-creator of the ReMatriate Collective. Based between the Yukon and unceded Coast Salish territories in Vancouver, Frei Njootli works primarily in sound-based/multimedia performances. Frequently giving free workshops, her community-engaged practice focuses on visual Indigenous sovereignty and relationships with land. She speaks about Bushed Theories in the 2016 Spring issue of American Indian Culture and Research Journal. Frei Njootli has presented internationally on her work and has exhibited recently at the Vancouver Art Gallery, the Art Gallery of Southern Manitoba and has been long listed for the Sobey Award, holding an MFA from Emily Carr as well recipient of many awards and grants. She is currently being mentored by Lorraine Netro to advocate for the permanent protection of the Porcupine Caribou Herd.

Join us for a Gala Opening Reception at Definitely Superior Art Gallery with three new exhibitions featuring regional/national/international artists-part of our 29th anniversary/appreciation celebrations and a ferocity of Art, Music, Dance and New Media Performances plus catered refreshments.

in partnership with Neechee Studio, made possible by the Ontario Arts Council