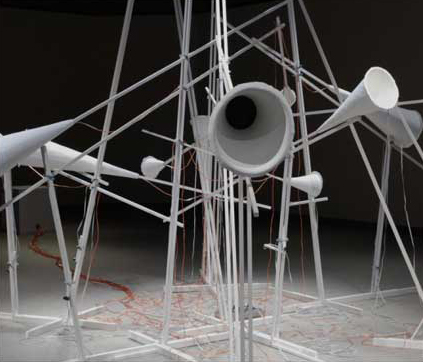 CIRCULATION OF THE FLUIDS – CATHERINE BECHARD AND SABIN HUDON

Catherine Béchard and Sabin Hudon form an artists duo who live and work in Montreal in the fields of sound sculpture, kinetic sound installations, audio art, electronic art and performance. The duo’s installations put into perspective the transient and ever-changing nature of things and beings as well as our temporal presence in the world. The Circulation of Fluids Supports listening, interaction and sound generation with recordings of water as source material. It probes water’s resonance as a pervasive and familiar fluid that is present in all aspects of our lives, in our bodies, the earth, and the planet as a core substance. Visitors perform the work, their physical movement captured by sonar sensors. The sounds trigger the imagination, but as well raises ethical, economic and political questions. Their collaborative works have been featured in solo and group exhibitions throughout Canada and Internationally such as the Czech Republic, Brazil, the United States and Germany to name a few. Gala Opening Reception of 3 new shows – featuring: art / music performance and a wintery wonderland of refreshments